Brothers of the 'Phin

I chanced upon a sailor once
with an emblem on his chest.
It appeared to be two angry sharks
on a trash can for a rest.

His white hat was wrinkled and dirty;
his neckerchief tied too tight
and he had only one eye open
as he staggered through the night.

He was young and scrawny and wiry;
with knuckles cracked and oozing.
I could tell from the way he looked and smelled
he'd spent the night whorin' and boozin'.

But as he pulled abreast, he squared his hat
and said "Sir, do you have a light?
I'm due back aboard by quarter to four
or the COB will be settin' me right."

As I fumbled around for my lighter
he pulled some smokes from his sock
"and I'll be damned lucky to make it," he muttered
'Cause I'm steamin' against the clock."

Through the flame of my well-worn Zippo
I could see a smile on his face.
"But, you know -- it was damn well worth it.
That 'Bell's' is a helluva place."

He sucked the smoke deep down in his lungs
and blew smoke rings up towards the moon
Then he rolled up his cuffs, pushed his hat to the back
and said "maybe there'll be a cab soon."

In spite of the time he was losing
He was wanting to shoot the breeze
So we sat on the curb, like two birds on a perch
as he talked of his life on the seas.

I asked about the thing on his chest
and he looked at me with a grin.
Then he squared his hat, snubbed out his smoke
and said "I'm a Brother of the 'Phin."

"I'm one of the boys who go under the sea
where the lights from above don't shine;
Where mermaids play and Neptune is king
and life and death intertwine.

Life on a boat goes deep in your blood
and nothing on earth can compare
to the feeling inside as she commences a dive
going deep on a hope and a prayer.

I've sailed some fearsome waters
down below the raging main
and I've heard that old boat creak and groan
like the wheels of a railroad train.

It's the one place on earth where there ain't no slack
where you don't have more than you need;
where each man is prince of his own little space
and each lives by the submarine creed.

There ain't much I've done in this fickle life
that would cause other men to take note,
But I've walked in the steps of some mighty fine men
who helped keep this country afloat.

They slipped silently through the layers
down below that raging main
while up above enemy men-o'-war
laid claim to the same domain.

Brave sailors were they
in their sleek boats of steel
silently stalking their prey
and closing in for the kill.

They died as the lived
unafraid, proud and free
Putting all on the line
to secure liberty.

Their bones now rest in glory
down in Neptune's hallowed ground
But their souls stand tall at the right hand of God
Awaiting the claxon's next sound.

So, it's more than a "thing" that I wear on my chest
It's a badge of the brave, proud and true.
It's a tribute to those who have gone here before
riding boats that are still overdue"

It's the "Dolphins" of a submariner
worn proudly by the few
who've qualified at every watch
and touched every bolt and screw.

They know the boat on which they sail
like they know their very soul
and through the fires of hell or the pearly gates
they're ready for each patrol.

But when in port they take great sport
standing out from all the rest.
For deep inside they burn with pride
for the dolphins on their chest."

Then he stood erect, squared his hat
and pulled his neckerchief down to the "V"
He rolled down his cuffs, put his smokes in his sock
and squinted back towards the sea.

"I can hear them diesels calling
So I'd best be on my way.
We'll be punchin' holes in the ocean
when the sun peeks over the bay."

As I watched him turn and walk away
I felt honored to know such men.
For they bring life to Duty, Honor, Country
these — "Brothers of the 'Phin." 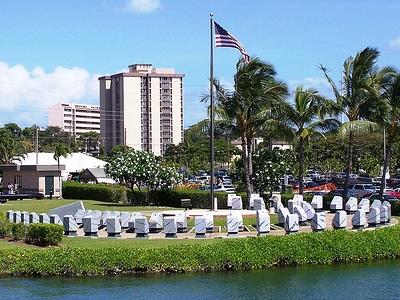 This memorial, also known as the Waterfront Memorial, is located in the museum park of the USS Bowfin at Pearl Harbor Hawaii. The memorial commemorates the 52 American submarines which sank in the Second World War and the more than 3,500 crewmembers who were killed. Each stone represents a sunken submarine. Written on it is a brief history of the submarine and the names of the servicemen who fell.
Share