The purpose of this Microsoft Word Tips & Microsoft Word Help page is to introduce and publish my version of a Table & Cell Data template add-in that I find more useful and reliable than the TableCellHelper macro provided by Microsoft in earlier Word versions and distributed with the Macros8.Dot template.

Actually, I have never been able to get Microsoft's version to work reliably at all. If you are interested in experimenting with Microsoft's TableCellHelper macro you can download it here: Macros8.

I call my add-in TableCellData. Unlike WordPerfect, Word has a shortcoming when it comes to determining the location of the IP or selection in a table. This can be frustrating when you are working in a table with many rows or columns. TableCellData can provide this and other information about your tables as either a message box or status bar display or both.

The illustration below shows the standard status bar report for a single uniform table (i.e., a table with no split or merged cells)

Table cells can be merged or split. For this reason, TableCellData reports the maximum "Max" column and row count. For example, in the following table, cell C5 has been split into three cells. Therefore there are now 12 Max columns. While the hard column headings indicate the cursor is in column "J," notice the cursor is location is accurately reported as L5. This would be important if you needed to reference this cell's value in a calculation field. 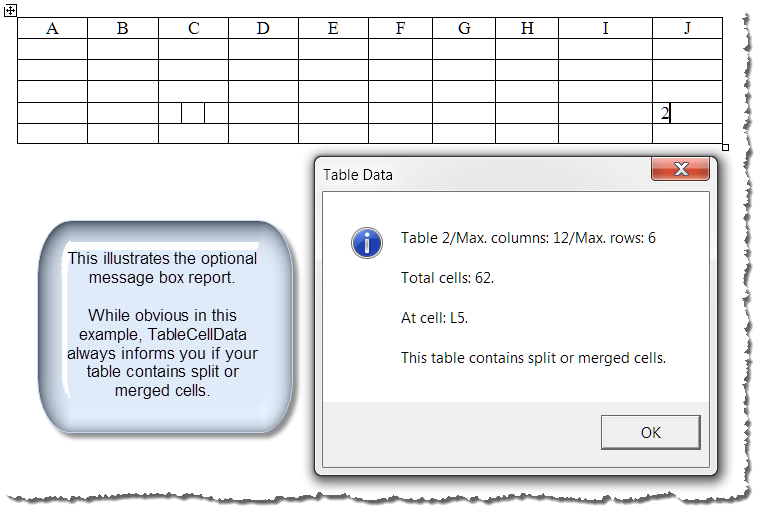 TableCellData can also report the range of selected cells. This feature is only 100% accurate in uniform tables (i.e., tables without split or merged cells).

Note: Microsoft's TableCellHelper has the same problems but it doesn't tell you about it. 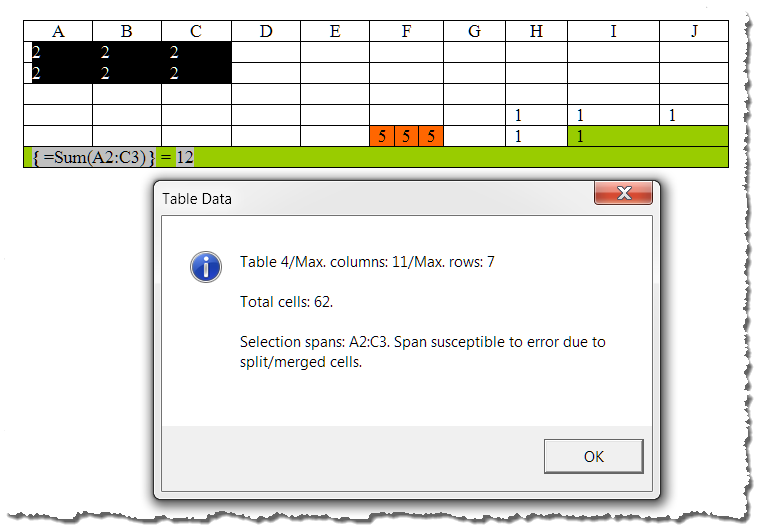 I've placed double formula fields in these illustrations.  One to show you the field code and one to show the result. 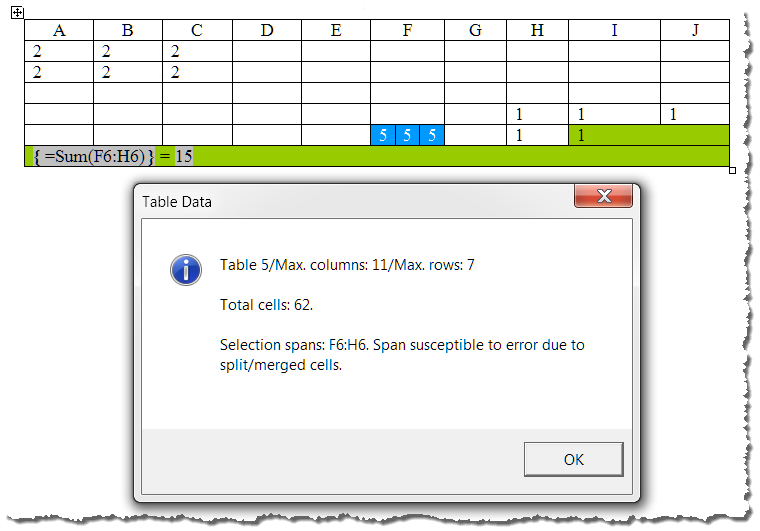 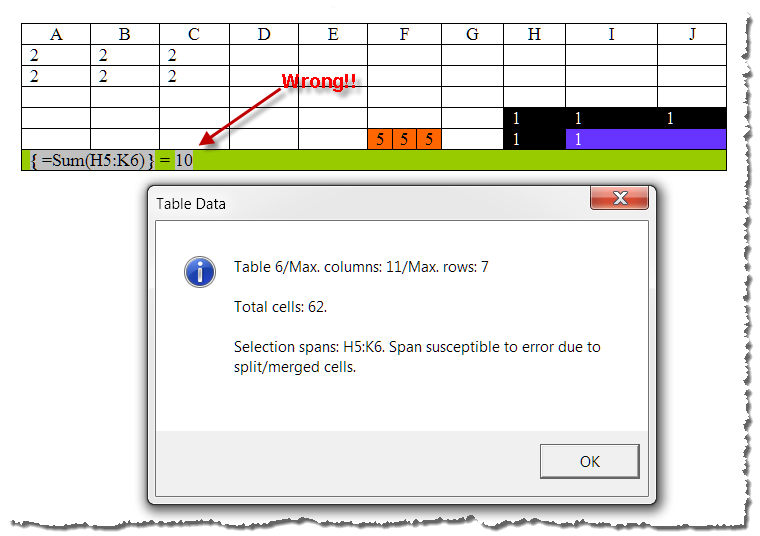 There is no readily available VBA solution to this range reporting problem. It is pretty much hit and miss. Therefore I have provided an option in the TableCellHelper code to completely suppress span reports if the table contains split or merged cells. An example of the suppressed report is shown below. 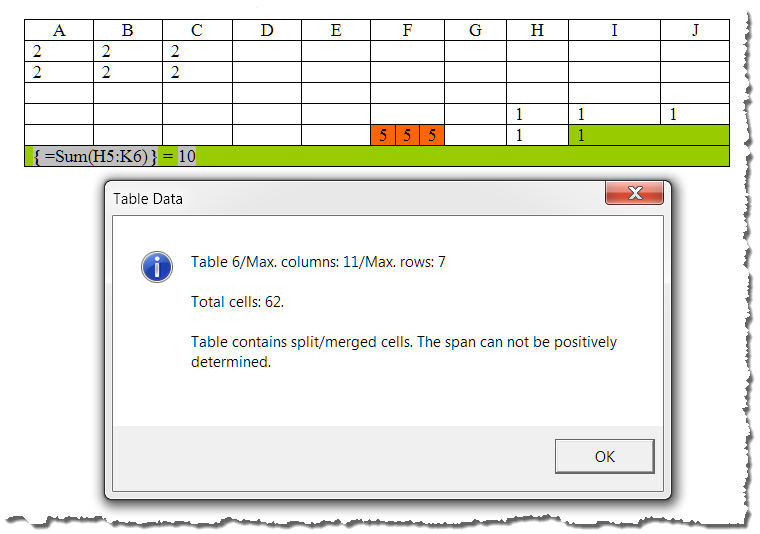 TableCellData will identify nested tables down two levels. The following illustration will help you understand how information for nested tables is reported. The cursor is located in cell A2 of the second table in cell B3 of the first table in cell B1 of the second table of the document. While the table IDs are reported, only the cell ID of the lowest level nested cell is reported.

Note: To determine the cell ID of a parent cell (i.e., a cell containing a nested child table) you must put the cursor directly in the cell proper (i.e, in the cell, but outside of any nested table in the cell). 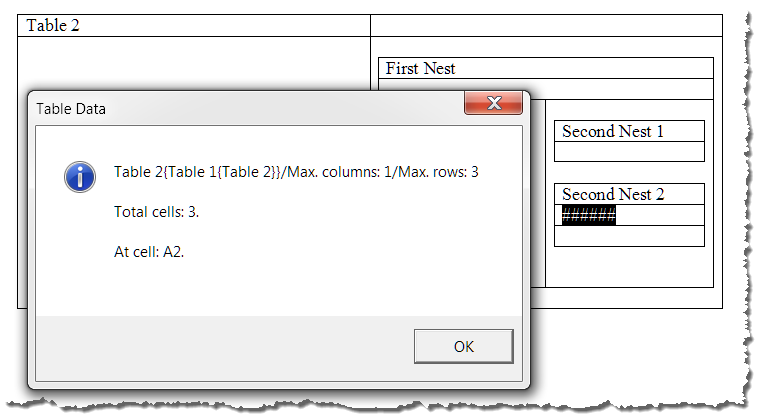 The VBA code required to report table cell data is provided in the code pane below:

To use TableCellData with downloading the add-in, simply copy the procedures to a module in any document VBA project.

In the add-in, I've included a dynamic control to the "Tables" menu.  The control is only enabled when the selection is located in a table. 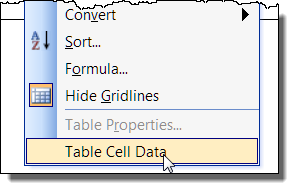 That's it! I hope you have found this tips page and the add-in useful and informative.