General Colin Powell had a wonderful way of saying much with few words. His “shock and awe” description of the opening days of Operation Desert Storm described in two words what the world was watching on television. Perhaps “Shock and dismay" is a phrase well suited to describe the reaction of many intermediate and advance Word users upon their introduction to the Ribbon user interface (UI) in Word 2007/2010.

Be that as it may, and despite the wailing and gnashing of many, I think that the Ribbon UI is here to stay and serious users should learn to get along with it.

This Microsoft Word Help & Microsoft Word Tips page presents my attempt to show you how you can customize the Ribbon UI without resorting to "commercial" third party add-ins (i.e., add-ins that you have to pay for).

Mastering the methods presented here, you can regain complete control of your Ribbon UI; both its look and its functionality. Given a chance you may one day come to appreciate the ribbon. Especially after you learn that it can be customized in ways far beyond the capabilities of the former command bar menus.

The ribbon is customized using an XML script. From here on I will try to refer to this script as RibbonXML. While you don't have to be a rocket scientist to customize the Ribbon UI, you do have to be willing roll up your sleeves and learn just a little about RibbonXML structure and some of the individual ribbon controls.

An excellent resource to gain some technical background and information about Ribbon customization is available in a series of Microsoft articles:

In my opinion the real value of these articles, once you see how the ribbon is customized here, is as a reference for exploring additional ribbon controls and their methods, attributes and callbacks.

In the examples that follow, I perform the customization using the Office Custom UI Editor and  Word template add-ins. I used this approach because ...

Using the methods described here, ribbon customization can be applied to a single document, all documents based on a particular Word template, or globally using a Word template Add-In.

Enough background. Now on to the process of customizing the Ribbon UI.

The first example is very basic. Here I will show you how to "hide" a single built-in control on the ribbon. Let's hide the "Macros" group from the "View" tab. You might want to do this to make room for a different control.

The steps for making this customization are outlined below: 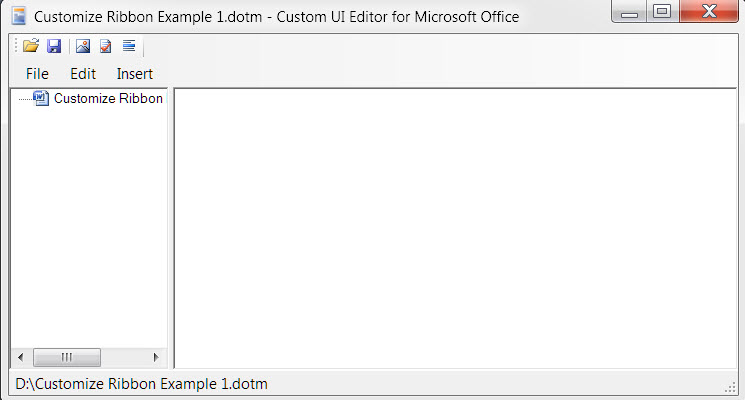 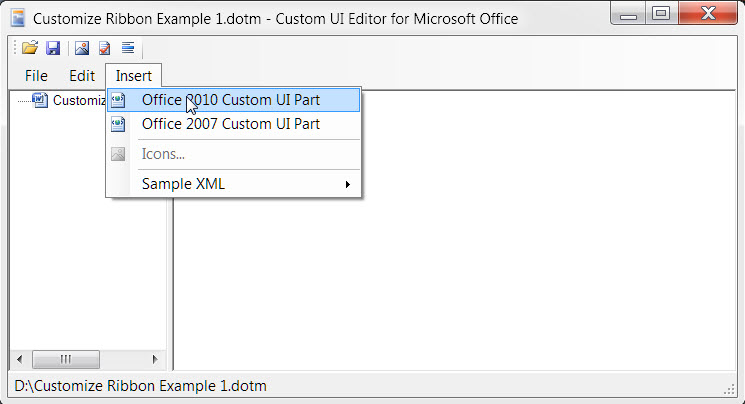 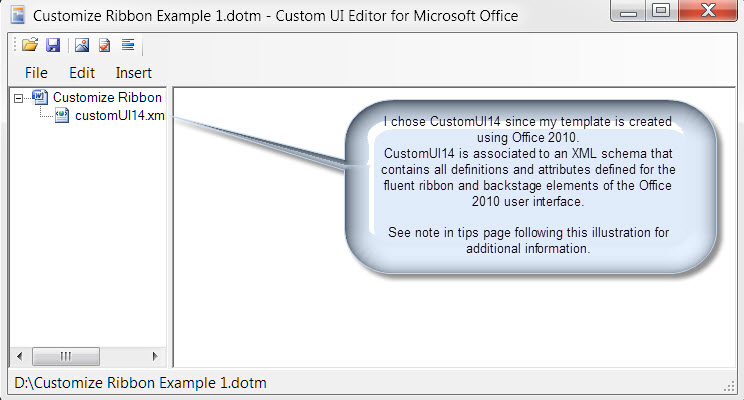 Notes:
1. As the Custom UI Editor may be upgraded, illustrations depicting the editor on this page and other pages on this site may vary slightly from its actual appearance.

2. When developing RibbonXML scripts you may elect to include dual scripts, one defined in CustomUI14 and one defined in CustomUI12.  This enables you to define variations in how your custom UI is displayed when used in Word 2007 or Word 2010.  Ron de Bruin provides an excellent example using Excel, which can be easily applied to Word, here: Load different RibbonX when opening file in Excel 2007 or 2010.

The editor after pasting in the RibbonXML

Note: You can't physically remove the built-in controls on the ribbon. Instead you use the "visible" attribute of the control to determine if that control is shown on the ribbon.

2. Even RibbonXML that is well formed can contain errors that prevent Word from interpreting your customization.  Always set Word's option to detect user interface errors. 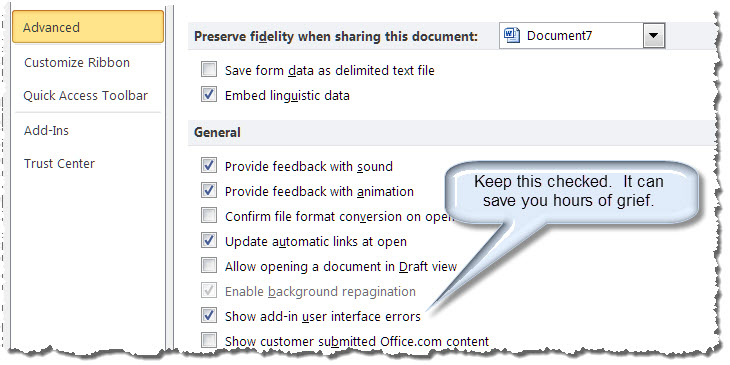 Utilize Word's options to help you detect and eliminate errors

For more on template add-ins and how to load them, see Organizing Your Macros/Template Add-ins  at: Installing Macros 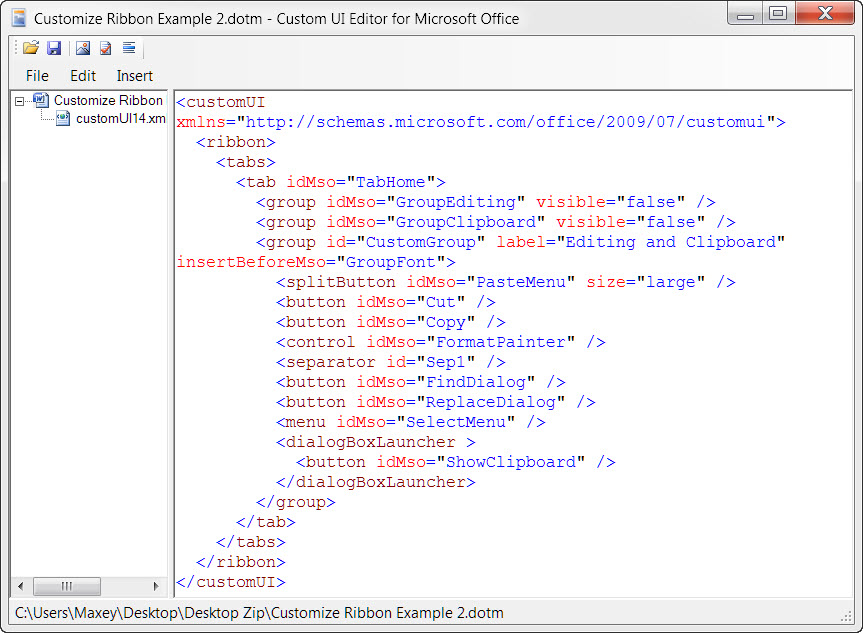 Reminder: You can't physically remove or edit built-in controls on the ribbon. Instead you use the "visible" attribute of the control to determine if that control is shown on the ribbon.

- Creates a new custom group "Editing and Clipboard" positioned before the built-in GroupFont.

- Adds built-in buttons, a control, a menu, and a dialogBoxLauncer to the new custom group along with a custom separator.

Notes:
1. "idMso" is the fixed internal tag for built-in controls. The idMso must match a valid control name. You can determine the name of most of the built-in controls using the Word Options>Customize (or Word Options>Customize Ribbon) and scrolling your mouse over the built-in in command controls. The idMso appears in screen tip in parenthesis e.g., Popular Commands | File (FileSave). Additionally, a complete list of Ribbon UI control names and types can be downloaded from Microsoft: List of Control IDs (Office 2007) & List of Control IDs (Office 2010)

2. "id" is a arbitrary user defined unique tag for custom controls like the separator used in the example above. You can use practically anything you like but it must be unique for each control used. A best practice is to stay consistent and use some sort of numerical sequence.

The range of modification to the Ribbon UI using built-in controls and a few custom separators is practically endless. With a valid, and yes lengthy, XML script you can create a custom tab containing almost all the classic menus and toolbars! To download a template that contains this script, visit my Ribbon Menu Controls 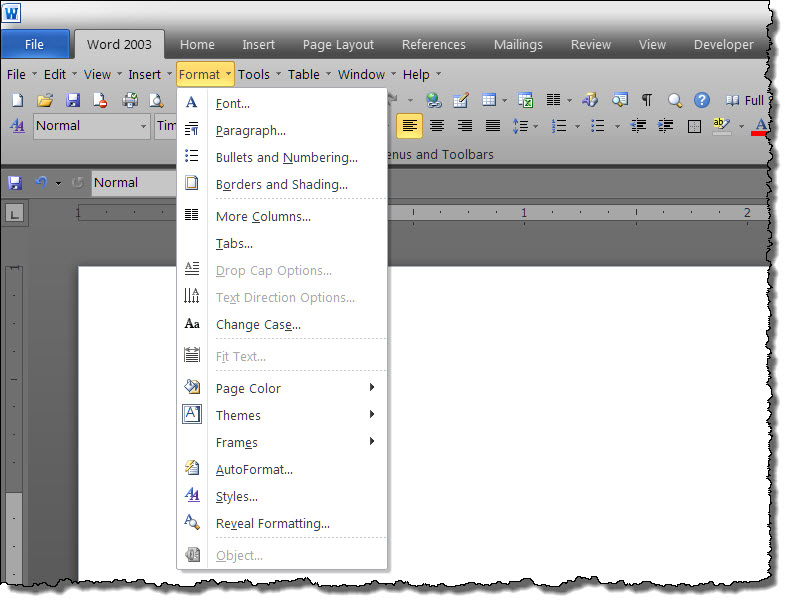 Example 3 – Running on your own two feet!!

For the final example I will show you how to create and add custom controls to the ribbon. My most frequent customization of the menus and toolbars in the classic user interface was for docking macros or other shortcuts that a user could call from various add-ins that I have created.

Notes:
1. There are several unique differences between the RibbonXML script used in the first two example and that used here. Notice the complete absence of "idMso" and the exclusive use of "id" instead."  Remember, idMso" is the fixed internal ID for built-in controls while "id" is a arbitrary user defined unique ID for custom controls.

2. Also note the addition of the "onLoad="RibbonControl.Onload" in line 2 and the the instructions that I have indexed under the "id" attribute of the controls. These are dynamic attributes or methods of the ribbon and its controls that use callbacks to interface and communicate with a VBA project in the template.

3. When Word executes this RibbonXML script, it really doesn't know (yet) how many items to put in the dropdown control or which label to apply. It also doesn't know which image or label to to associate with the toggle buttons. When the script is executed Word gets this information form data that you provide in a VBA project associated with the RibbonXML script through VBA callbacks.

Take Cover!! When you first open your template file in Word or click on your new "My Tab," you might think the world is coming to an end. There will be several errors generated and displayed. This is normal at this point because the RibbonXML script is looking for instructions from a VBA project doesn't exist yet.

Note: The module names are arbitrary. RibbonControl is used to match the callbacks assigned in the RibbonXML script. The project name and name specified in the script could be anything you like.

Note: Several users have experienced problems getting these examples to work when they attempt to copy and paste some of the RibbonXML or VBA provided above. I believe these problems are due to some of the formatting I used in this web page. Therefore, I am providing copies of the working files that contain all of the RibbonXML and VBA code for you to down load (Files ending with "A" provide the CustomUI12 for Word 2007): Ribbon Customization Demo Templates

I realize that for the beginner these methods may not be a walk in the sun. I also have stamped my foot and cried that I want my menus back. I think I can say that I fully understand the reluctance that many people will have at jumping in and learning to apply these methods. However, as you expand on the basics provided here, I think you will soon relize the teh incredible range of customization available with the Ribbon UI. This site provides several examples of advance customization. If you've not already done so then browse the other pages and you will fine several examples.