Note:  Even if you are interested in the Content Control Method, be sure to review this section as well.  It contains lots of information on userforms in general that you won't want to miss.

For this section I am going to create a demonstration template with a Userform for a "Student Survey" form.  The template provides:

The template when a opened in Word 2010 with field codes displayed is shown in the illustration below. 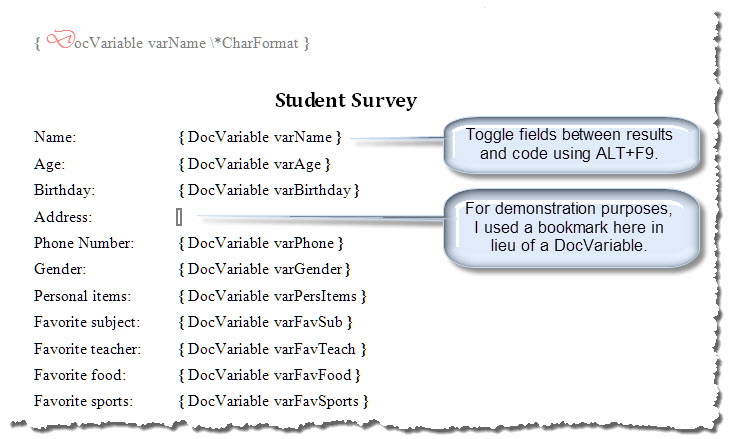 If you don't know what a template is or if you need help creating one see Word MVP Suzanne Barnhill's: How to Create a Template

Note: If you are using Word 2003 you will use a .dot extension template file.  As the template contains a VBA project you must use a macro enabled (.dotm extension) template with Word 2007/2010.

On Doug's suggestion, with one exception, I am departing from an often used practice of using bookmarks as place marker\data stores in the document and will use document variables and DocVariables fields instead.

The exception is that I will use a bookmark for the "Address" information.

After you create your template and enter the DocVariable fields and bookmark it is time to open the Visual Basic Editor (VBE) to create a standard code module and Userform object.

The Userform for the Student Survey form is shown below: 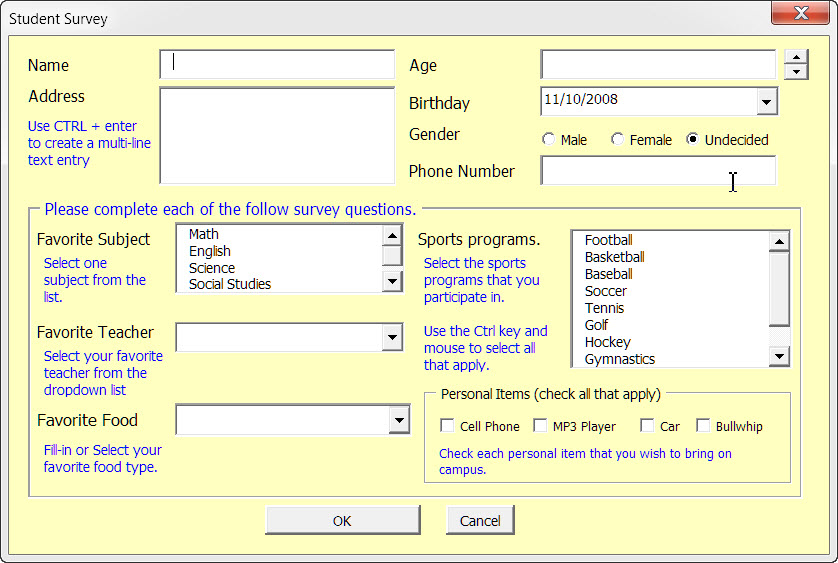 In this Userform I have included most of the common Userform controls.

I used one uncommon but very handy DateAndTimePicker control for entering the birthday. 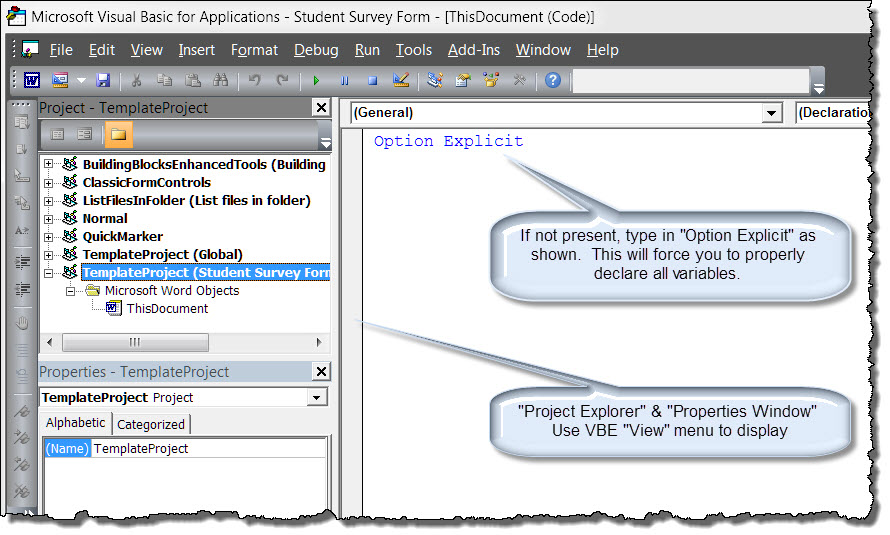 Using the VBE Tools>References menu verify or establish a reference to the Microsoft Forms 2.0 Object Library and Microsoft Windows Common Controls-2.6.0 (SP3) as shown below

Note: Unfortunately Microsoft no longer includes the Microsoft Windows Common Control-2-6-0 (SP3) in the resource library. You need this reference for the DateAndTimePicker control to work. If you are unable to find it in the list of available resources then you will need to download MSCOMCT2.OCX (see Office Help & Support KB 297381). Once you save MSCOMCT2.OCX in your system directory (e.g., C:\Windows\System32 on 32-bit or C:\Windows\Syswow64 on 64-bit), you need to register it. Click "Start" then "Run," type in regsvr32 and then the path to the file e.g., c:\windows\syswow64\mscomct2.ocx, then click OK. If you don't want to go the trouble of doing this, I have included a second Userform in the .dot version of the Student Survey Form template that substitutes a Textbox control for birthday and omits the DateAndTimePicker control.

Use the VBE Insert menu to insert a "Module" and a "Userform." 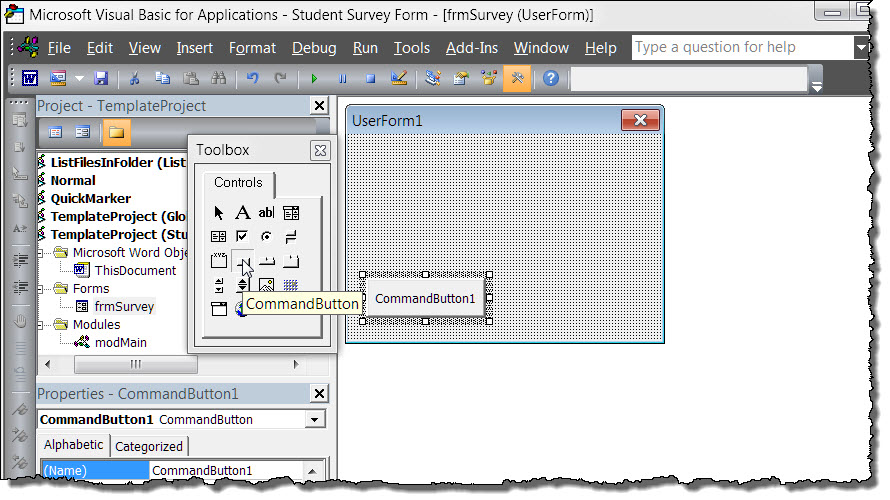 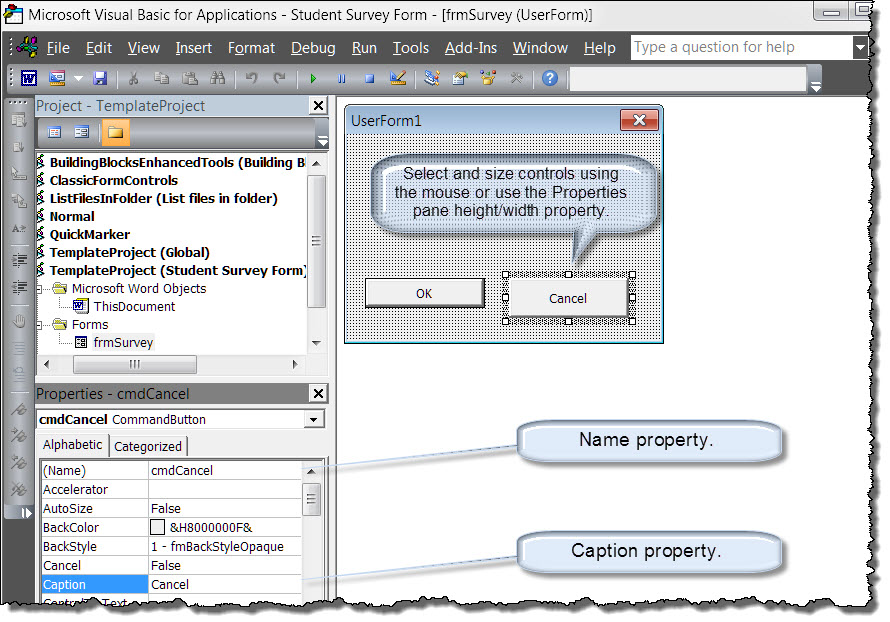 Right click the frmSurvey object in the Project Explorer and select "View code."

Your code pane should look like the illustration below:

Now we will enter the basic code in the standard code module "modMain" you created that will create and display the Userform. Double click the project module "modMain" and type in or copy and paste the following code:

Notes:
1. You can step through a VBA procedure from the VBE using the F8 key. Give it a try. As you step through the code you will see your Userform be created and displayed. Click either "OK" or "Cancel" and you will see it disappear.

2. If you want a little more schooling on building a basic Userform with a more detailed discussion of the code lines that call, initiate, show and ultimately kill the form see my: Custom VBA Message Box

I am not going to step through the construction of each control or the event procedures.

Instead, you can download the complete template (Word 2003 and Word 2007/2010 versions) with all the code from the tips page demo pack link at the end of this tips page.

I will review some of the event procedures and the processing code in the discussion that follows.

You may have noticed that the ListBox and multi-select ListBox in the example form has items displayed and one of the "Gender" option buttons is selected. This is accomplished using the Userform "Initialize" event. This event establishes the conditions in the Userform when it is initially displayed to the user.

The code used to initialize the Student Survey Userform is shown in the pane below. It illustrates how to set the state of an OptionButton control plus several methods for populating o Listbox and Combobox list members.

The spin buttons are used to increment the value in the age field by 1 each time the spin button control is pressed up or down. The code for this control is shown below. You should see that the upper limit is 120 and the lower limit is 0.

Bonus Tip: Variables with the same name and type used in multiple procedures can be declared once at the object level (i.e., right at the top under the Option Explicit statement)

Students being students, you might want to validate some of the Userform inputs.

You might want to validate and format the data entered. The phone number field in the Student Data Form formats the number entered as: (###)-###-####.  For more on validating text entries in Userforms, see my:  Validate Userform Text Entries.

You might want to ensure that fields are not left blank or comment on a particular entry. You can do this with the "OK" click event procedure in the frmSurvey module as follows:

From the form to the document

Notes:
1. Notice that it takes two additional steps and lines of code to process the bookmark for the address data. Whenever you place data "in" a bookmark instead of "at" a bookmark you must redefine the bookmark range. This destroys the bookmark and another one with the same name must be added at the redefined range. This may seem like a lot of trouble but it is worth the extra effort.

2. If you elect to use a DocVariable for a multi-line textbox and want to indent the subsequent lines to tab stop you would use the following code: oVar("varAddress").Value = Replace(Me.TextBox1.Text, Chr(10), Chr(9))

In the procedure above we have set the value of several document variables to the value that the user enter entered in the Userform. The DocVariable fields associated with these variables were inserted previously in the template. Those fields now need to be updated to reflect the new variable values. We accomplished this by calling a separate procedure "myUpdateFields" that cycles through each storyrange in the document and updates the fields. This procedure is shown below:

To polish the cannonball, DocVariable fields that point to a variable that doesn't exist can look pretty gnarly when the field result is displayed.

To keep our template looking nice we can create and set initial values in each variable with a simple procedure:

Now all we need to do is deploy the Userform when a student creates a new Student Survey Form from the template. This easily accomplished by adding an AutoNew event procedure to the project module "modMain." With this procedure we will create the document variables and display the form each time a new document is created from the template.

In this section I will provide an example of a template and userform using content controls in the main document which serve as target ranges for the data entered by the user in the userform.  These content controls replace the bookmarks/document variable fields demonstrated earlier.

This method has several advantages: 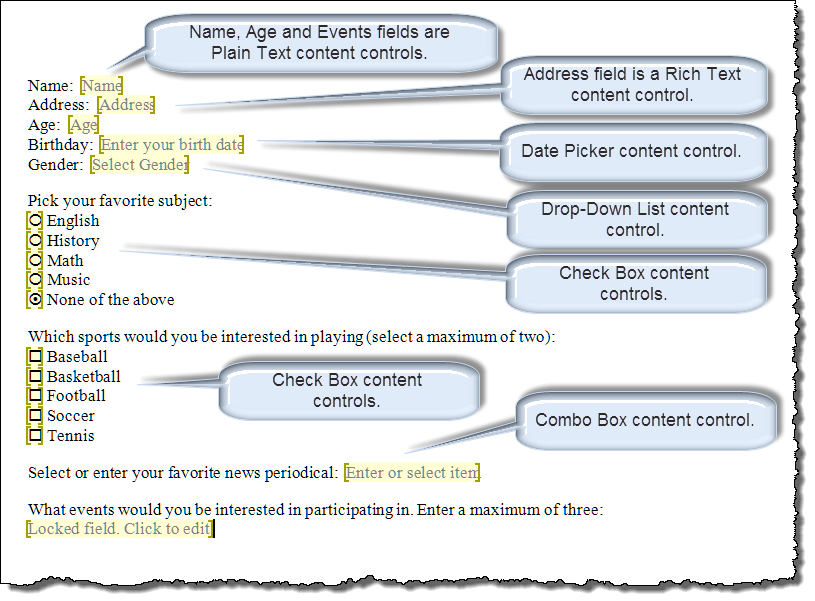 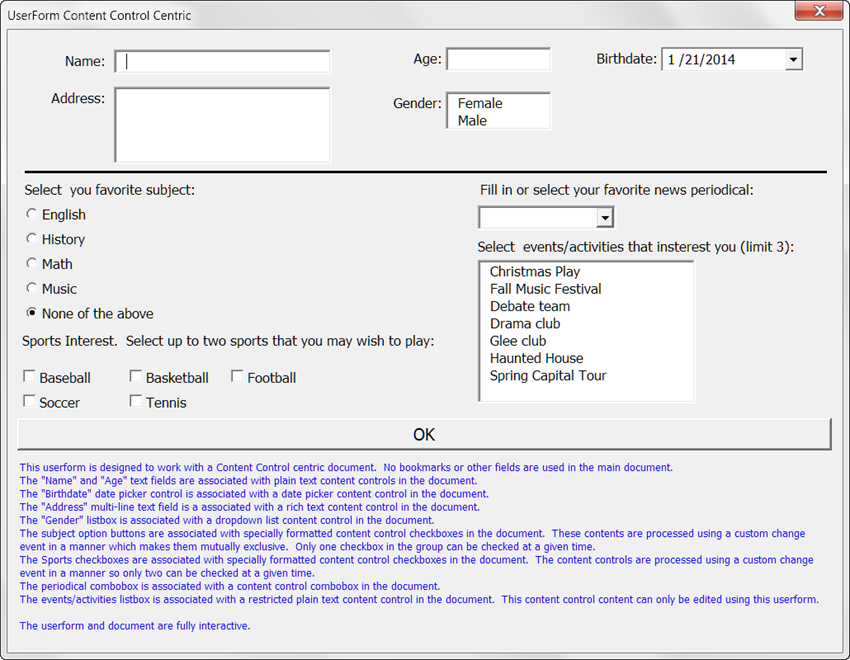 Logic in the Userform and in a custom Document_ContentControlOnChange event work together to ensure that the user is limited to selecting only one "subject" option and up to two "sports" activities.

Logic in the Userform ensures that the user is limited to selecting a maximum of three events in the Userform "Events" listbox and converts and inserts the selected items into a properly formatted text string in the document "Events" content control.

All of the associated code is available in the template you can download from the Userform Demo Pack link below.  For more information on mutually exclusive option buttons, see: Mutually Exclusive "Content Control" Option Buttons.

That's it! This concludes this Tips Page. I hope that it gives you a better understanding and appreciation for Userforms.  You can download all of the templates used to create this tips page here:  Userform Demo Pack